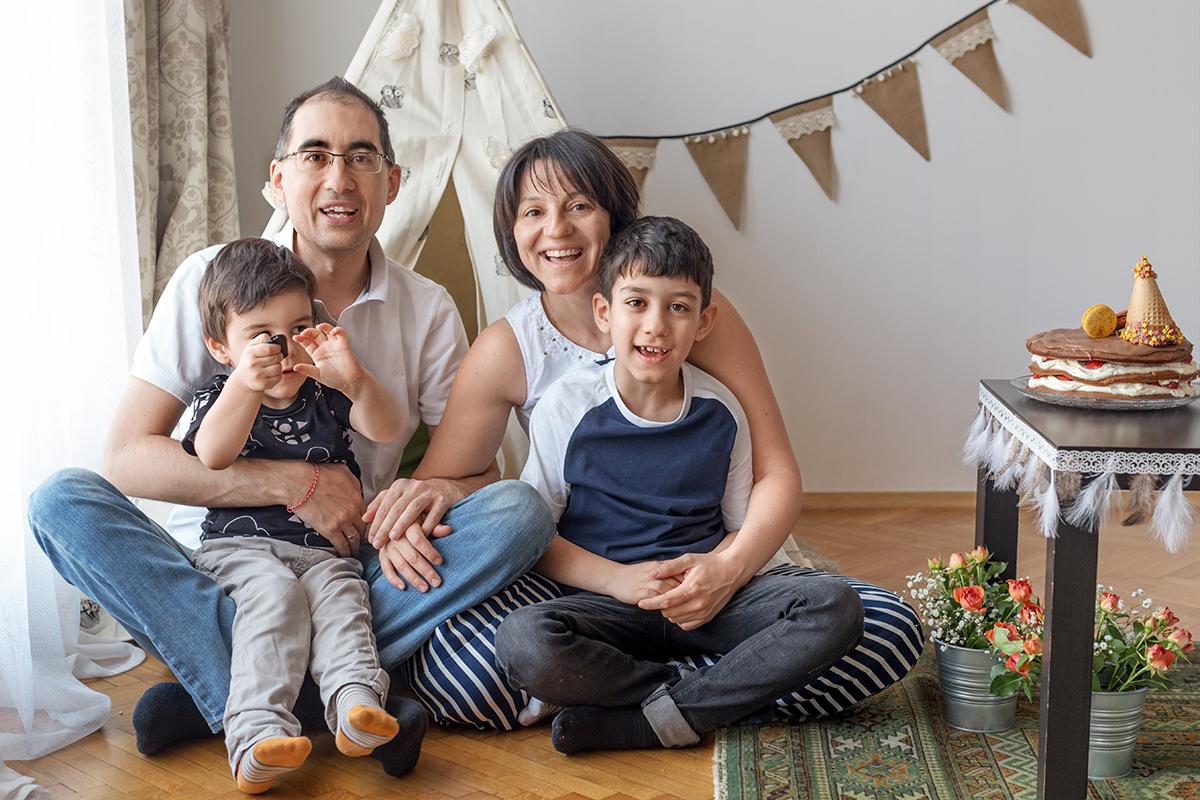 Alice and Ben adopted James and his disabled brother Luke, when they were four and three years old respectively, and their four birth children were in their teens.

We've been married nearly 25 years and we've always had the idea that we'd like to have four children and then adopt after that. And that's exactly what happened! But it just started as a dream a long time ago.

When we first looked into adoption, it was back 2006, we were renting a farmhouse, Ben had just started his business and we had four children close together in age so it was quite a handful. The adoption service thought it would work better if the children were a bit older. At the time we didn't like that, we were anxious to get on with it straight away. But I think that having children who are that bit older has made it easier for them, because they can understand the whole thing better. They can be sympathetic rather than feeling like they're competing.

People always said that during the adoption process the social workers want to know everything about you but as far as we were concerned that was a good thing. From our angle, they're working to find what's best for us because they're on our side really, so we didn't find that difficult. People say it's scary but in our case it wasn't.

Our local adoption agency were really, really good. The course was brilliant. All the social workers were really just brilliant people. You started to want to be a social worker, because we were really impressed by all of them. We felt on their wave length with them, all the communication and all our contact at home was really good.

The bit we always remember is how they teach you that adopted children have missed out on the 'blocks' in their early years, so even though they're aged three and four, you might expect to be doing something that you'd do for a one-year-old. Like, when they first arrived, they woke up at five every morning and they'd have snuggle time, and we wrapped them in blankets! That time is really valuable, because they are babies really and that's the sort of baby stuff that you're putting back in.

We also spoke to the school about giving James and Luke opportunities to give them back those early years, and they've been brilliant about it.

We hadn’t considered adopting a child with additional needs initially. We got in touch with a fostering organisation some time ago and through them we met this one woman who had four birth children, four adopted children and two of them were disabled and she really inspired us. In the end it was obvious that we weren't fosterers, we were adopters. But it was still really helpful and they gave us the vision that things can work really well with disabled children.

We thought that maybe our birth children would be able to find it easier to understand a disabled child - there's a physical need there and maybe that was easier for them to engage with. Sometimes I think the disability protects them from a bit of trauma as well, because the health professionals get in there quite early on. There are lots of plusses, I think.

We gave a lot of thought to how our birth children would feel about being siblings to adopted children. We were just terrified of hurting them, but we started to believe that it would be a great thing for them and it has been. The centre of the home is still focused on children because we've got the two little ones. And they all do different things with them and they all have a different way of relating to them and it's been really exciting to watch. There's a nice kind of pride in them about it, like they feel part of something that's been really worthwhile. It's made the home go on being a family home for longer.

When they arrived, it was the Easter holidays before our eldest child's A-levels and I was a bit worried about that. Jess played with them loads and she said it made it easier to revise because she had two different focuses, which helped her in a way. In the end she got into university with really high marks, so it didn't ruin her exams at all!

Our social worker knew the children really well, so everything that she had to offer was really valuable. All her visits were great and we found it was best just to be completely honest and whatever was happening, we'd tell her. She always had a good piece of advice every time. The worst that can happen is that people don't ask for help when they need it; because things could get much worse. But that's why the support after adoption is good; because they want you talk about things.

Like right at the beginning, it was a lot for James to cope with to come to a new home and then into a new school. He would explode into confusion and muddle when he came home after school because everything was too much. Our social worker arranged some help just for that hour after school so I could just take him off on my own and every day he'd just run in the woods with the dogs. It's just having that extra pair of ears and eyes to think of solutions. But our faith has been really important as well, just in helping us get this far and in how we function as a family and how we cope on a day-to-day basis. It is really vital to us.

There was another mother from school who'd had birth children like us and they adopted a boy with a disability, so we started meeting for coffee about once a month. It was really helpful because you're on a different track to the rest of the world and there are some things you're going through that nobody else has experienced. Then we asked other families who'd adopted to come along and it gradually grew into a bit of a group. Usually we meet about once a month and everybody finds it so encouraging. It's just a chance to be with other people like us!

What's nice also about this group is that now the children have got friends who are adopted. In the summer, we had them all here for a big get together and it was just really nice, you know, for adopted children to mix together and they've always got each other as well.

We were talking about it recently and we said that the people you think might be the most supportive aren't always and then it might come from an unexpected place. You don't quite know how people are going to respond to adoption, it's a bit of an unknown. So your closest friend might not end up being your best support, you just don't know what will happen.

We're definitely happy as adopters! It feels like you're doing something every day that's so worthwhile. Sometimes you forget, you just get on with the busyness and plodding on with life but then you just stop for a second... Someone I know described it like sunshine has come into their family, it sounds a bit hard to believe in a way, but it's true!

I didn't know how nice everybody was, really, in our society. You start seeing the world through a different pair of eyes because I've always got Luke with me so you start seeing people's reactions and people are just so nice and so warm towards him. They both bring out the best in other people, I think.

The social worker said that it's quite likely that if you're adopted that at some time in your life that you might receive some sort of prejudice about it and as a parent you have to be prepared for it.

It feels like they've always been here as part of the family. I suppose it just fills your mind, you're a family with six children and you're aware of them, all six of them, all of the time. I can't really remember what it was like only having four.

And it's very rewarding in the end because you see the changes in them, and other people start seeing the changes as well and they start saying things to you and that's nice as well.

Is there anything you'd like to say to anyone else thinking about adoption?

If you are thinking about adoption don't give up, especially if circumstances in your life make it seem impossible. Don't give up. And it won't go away, if you've got that dream.

When you have a baby and it's in your womb, you don't stop because something's happened, you just carry on and it's almost like that, anything could happen but just don't give up, because that's life, circumstances keep changing.

I would also say: be honest. The more honest you are, the more your social worker can really work with who you are to get the best match. Just follow your heart and don't give up!