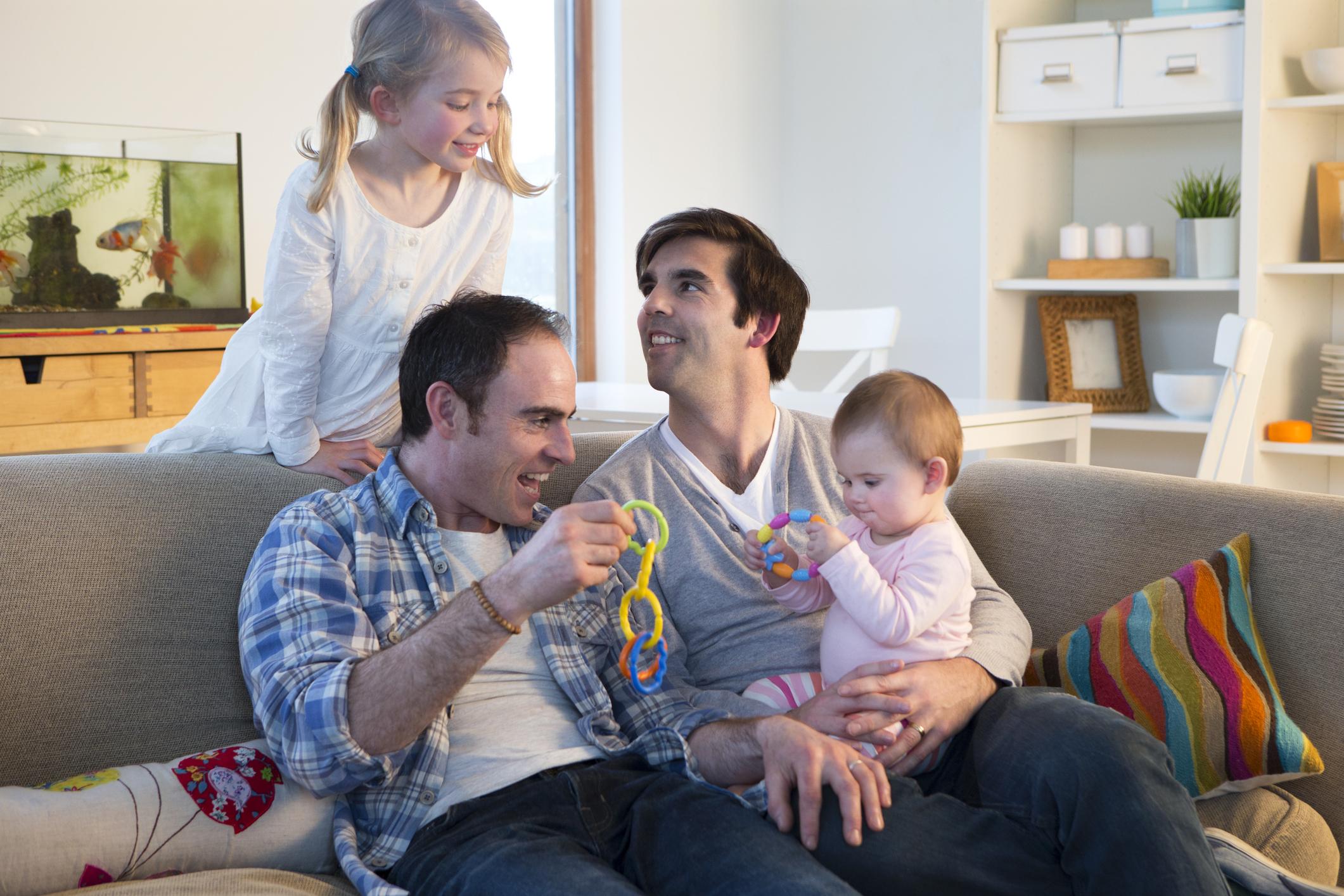 Alex 34 and Simon 36 decided to start their family more than four years ago and are now getting ready to welcome a little sister for their daughter, Amy

We’ve been together for 12 years and married for seven. I had always wanted a family and Simon had thought that being gay he would never be able to have kids. After we got married it really felt like the next step was to start a family and it was something we both wanted. We went to an adoption information event just before our honeymoon, so we had lots of things to think about!

The preparation course took place in January and we met our social worker in April that year. After assessment and panel in September we were shown a profile of Amy who was nine months old. We had both wanted a daughter and had agreed not to look at any photos until we had read the profile, but there she was, her big blue eyes looking up at us on the page and we both knew straight away.

There were other people interested in adopting Amy. She had no physical or developmental issues and was under two, so we had to wait while the social workers whittled us down to find the best match for her. That was really hard, waiting. Thankfully we were chosen just before Christmas, so the tree came down on Boxing Day so we could get the house ready for Amy’s arrival!

Before we met her we created a ‘talking book’, where you put photos of yourselves and record your voice and a video. We wore the same clothes each time so that when Amy watched the video and saw the photos she would recognise us. When we visited her at her foster carers for the first time we wore those same clothes and she stood and pointed at us, which was great.

It felt very natural meeting Amy: overwhelming, but natural. The foster carers were brilliant – they adopted us for that first week. We stayed for dinner and chatted to them over a glass of wine after Amy’s bedtime.

Gradually over that week we spent more and more time with her – a trip to a shopping centre, the Sea Life Centre and dinner at Nandos – which she still loves! We’d do the night time routine at the foster carers’ house and we would just sit looking at her sleeping in her cot – it was lovely.

At the end of the week we spent a full day with her out in town and she refused to sleep in her pram and sat up watching everything – she didn’t want to miss a thing! After a week we came home with her and our social worker kept in touch every day over the weekend which was really supportive. Amy had been in a good routine at her foster carers and still sleeps 12 hours through the night and eats everything. We know we’re really lucky.

It was Valentines Day when Amy came home with us and it’s now ‘Amy Day’ in our house; she gets a present and we go out for tea.

After two years we decided to adopt a little sister for Amy. Since then we moved house so we have a third bedroom and Amy has started school, so there have been some delays in the process and it’s taken us two years to get to the point where we’ve seen the profile of a little girl who we’re hoping to meet soon. Amy is desperate for her little sister and we hope to be able to adopt her before her first birthday.

So what’s life like now? Chaos, but in a good way! We’re not a nine-to-five family, as we work shifts, but that means one of us can always take Amy to school or pick her up and we’re there to take her to Rainbows, swimming lessons, birthday parties and sleepovers. It’s really important to find time to slow down and all spend time together too: playing a game, watching a film or going to the park.

The last four and a half years have gone really quickly: Amy is nearly six and when I look at the photo we have of us with Amy at the foster carers I realise it’s gone in the blink of an eye.

I took 10 months adoption leave from work with Amy and that was a relatively new thing then; but it’s vital to spend that time with your child. Next time round, I’ll take adoption leave and Simon will take the first month and the last month off work so we can all be together during our child’s first year with us.

Be patient with any delays or challenges you may face. We had several but it meant that in the end we were matched with Amy and it was all worth it!

Try and get as much advice from your child’s foster carers as you can to help you and help your child settle in. And ask for as much information as you can from your social worker about birth family – anything that might affect your child, such as needing glasses early on if a birth parent had the same issue.